EMPLOYERS TAKE NOTE – WE CAN STILL LEARN FROM THE PETER PRINCIPLE 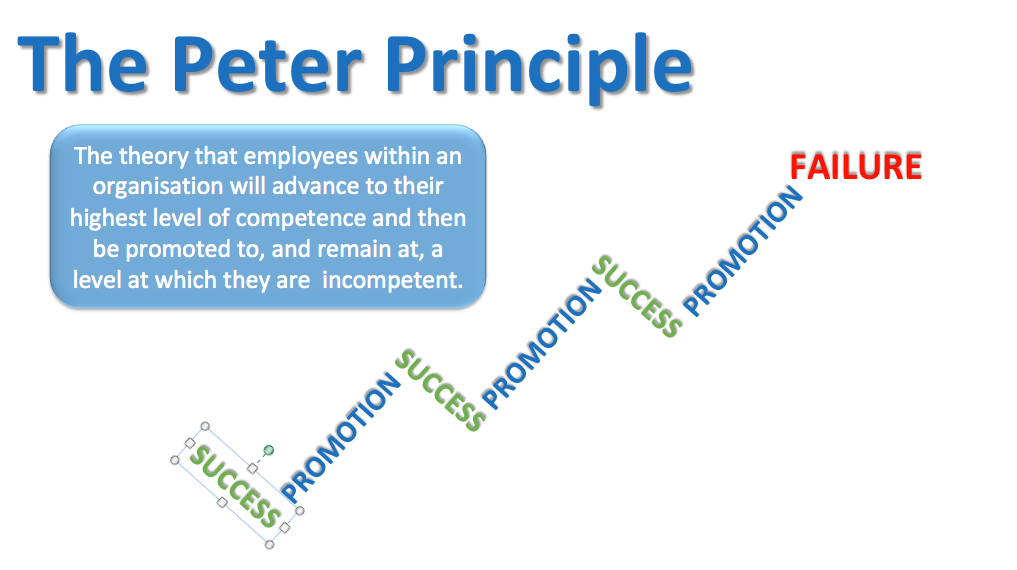 The ‘Peter Principle’ has been around for nearly fifty years. Recent research has underlined that it is still valid today.

It has implications for how we promote staff and the effects this has on our business.

“Peter Principle, n. – The theory that employees within an organisation will advance to their highest level of competence and then be promoted to and remain at a level at which they are incompetent.” (The Free Dictionary)

It is usual in business that people get promoted when they are successful at their jobs. They get promoted despite the fact that very often the skills required for their new position are different from their old position. If they are successful in this position, they get promoted again and again until they lack the skills for the new position and then they experience failure. Once this has happened, they get stuck in their new role – as they are no longer successful, no more promotions are available for them. They have risen to the level of their incompetence. Most organisations are bedevilled with unhappy managers who spend years and years in the same job.

Some researchers have even facetiously suggested that, as the skills required for one stratum of an organisation are completely different to those required for the next stratum of the business, why not promote the worst performing employees?  This in Dilbert’s terminology shows that “leadership is nature’s way of removing morons from the productive flow”.

Recent research of 214 companies reviewed 1,500 promotions in sales organisations. The research also looked at the characteristics of people promoted – whether they worked collaboratively or on their own (people who work collaboratively usually make effective managers).

It showed that people were most likely to advance in the business when they were successful in their sales jobs although they were poor managers – in fact sales declined under these promoted managers. Conversely, those who worked collaboratively were usually not promoted.

The new research shows that the Peter Principle is alive and well. Whilst many businesses accept the trade-off of promoting successful employees at the expense of having less effective managers, it is appropriate to reconsider how staff should be promoted in an organisation. In the long run it almost certainly pays to promote those who have the potential skills to be good managers. To the high flyers who don’t have the skills to manage, recognise them and give them hefty bonuses.

Finally, is it not better to move people who are not performing in a particular position either to another position where they can do a good job, or move them out of the company? This leaves the company with good managers and motivated staff as opposed to having frustrated blocked managers and lower performing employees.